This article serves as an introduction to the published versions of the lectures delivered during a conference (April 22, 1988) organised by the Frisian Institute of the State University of Groningen about 'Frisian and its standard'. It consists of seven sections, which summarise as follows:
1. the direct reason for the 'standardisation day' and a brief sketch of the themes of the four lectures;
2. an overview of recent research and other work on Frisian standardisation;
3. a concise character sketch of the Frisian-Dutch bilingual situation;
4. a description of the standard as implemented in 1985 by the Algemiene Fryske
Underrjocht Kommisje (= General Frisian Education Board);
5. some backgrounds of standardisation, e.g. the ignorance concerning (the extent of) Dutch interference;
6. some pros and cons of standardisation;

7. a short bibliography of works on the standardisation of present-day West-Frisian. 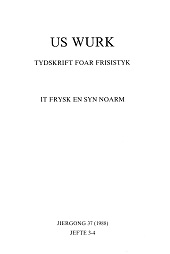