In the Dutch city of Maastricht one finds a bookstore in a former church building, a luxurious hotel in a former monastery, and a museum which contemporary architecture is inspired by the Florence Dome and carries the name of the monastery it was once housed in. It is the city in which once a year the church-es, convents, and chapels function as concert halls during the festival Musica sacra Maastricht. And it is the site of the PHD research ‘Festival Musica sacra Maastricht: discourses on sacrality’, of which a pilot study will be presented here. This article is an account of two rituals from different religious traditions, which were programmed as festival performances during the festival edition of 2012. The comparison between a Japanese Buddhist and a Roman Catholic ritual is an attempt to analyze how people relate to these different religious rituals in the non-liturgical context of the festival. 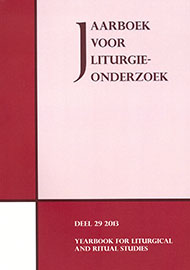