In 1983 a Mesolithic site was discovered by amateur archaeologists in the vicinity of Slochteren. From 1983-1986 the site was excavated per sq/m; all soil was sifted 4 mm mesh width). In total, more than 10 000 flint and other stone artefacts were recover­ed. No hearths were found, organic remains consist of charcoal and charred hazelnut. Preliminary analysis shows that points (mostly scalene triangles) are the most numerous type-class, followed by scrapers, burins and borers. Furthermore, there are some A-, B- and C-points, one atypical longed point, a Zonhoven point, a narrow trapeze and several backed bladelets. Based on the occurrence of hazelnut and various point-types, (part of) the site can be dated in an earlier phase of the Boreal. 14C da­tings of the organic materials are in prepa­ration. A Federmesser point and several blades should, on the basis of slightly hea­vier patination, probably be attributed to an earlier occupation. In the immediate sur­roundings several other Mesolithic sites are known, including a late Mesolithic site (core and flake-axes). 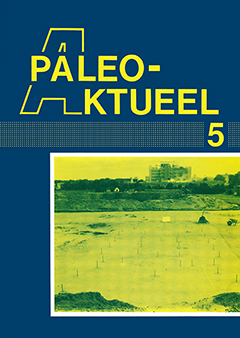