From September until November 1997, two Mesolithic sites were excavated in the Veenkolo­nien region in the province of Groningen. Both sites are situated on a sand ridge, approximate­ly 2 km Long, and were 750 m apart. The site NP-3 was already well known since excavations started there in 1984. In total an area of 6.500 m2 was investigated and more than 125 hearth pits were found, bringing the total number of hearth pits to more than 500! Several other pits were found to contain flint waste and occasion­ally same tools. The flank of the sand ridge produced two fairly large concentrations of flint artifacts, both waste and tools. Also some Lumps of red ochre were found. Most probably the site represents one or more settlements. This is by far the largest Mesolithic settlement complex (in total c. 40.000 m2) in the northern Netherlands, perhaps even in the entire Netherlands. The site S-1 contained about 80 hearth pits in addition to a few other pits, scattered over an area of 10.000 m2. It yielded a relatively small amount worked flint. Beneath the Mesolithic level the renmani of an Usselo soil (Alleröd interstadial) was found, containing a few worked flints (in­cluding a small thumbnail scraper and a re­touched blade). These most probably belong to the Late Palaeolithic Federmesser culture. Both sites belong to a complex of Mesolithic remains situated on this sand ridge. In the near future the finds will be studied in more detail. 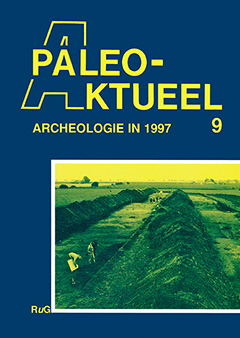