Maltreated children who are adjudicated delinquent: An at-risk profile

Children who are victims of maltreatment are at greater risk for later delinquency. While this connection is complicated, between 40 and 60 percent of all adjudicated delinquent youth have a maltreatment history. This paper examines this link and presents a delinquency profile for a population of victimized children in one Midwest county in the United States. This study utilized one population of maltreated youth (N = 9.942), comparing one group who were adjudicated delinquent (n = 2.090) and the second group who were not (n = 7.852). Bivariate tests identified the following risk factors that were significantly related to later youth delinquency adjudication: a child having first contact with the children's services agency after age eight; a child having more than one maltreatment referral or more than one maltreatment type; being a victim of physical abuse, sexual abuse, or neglect; having a maltreatment perpetrator who was the child's biological mother; being placed out of the home by children's services; and being adopted. Child welfare research, practice, and policy implications are set forth. Note: Erratum in IJCFW 2010 3-4: On the PDF the name of the second author of the article 'Maltreated children who are adjudicated delinquent: An at-risk profile’ was inadvertently omitted. The name of Patricia Stoddard Dare is added in the revised version. 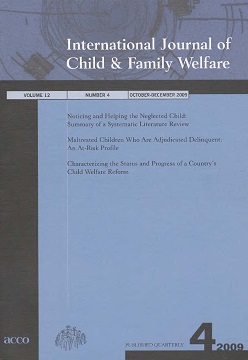