We compare matched samples of school-aged Chinese and Romanian adoptees in America who were adopted in the early and mid 1990s. Our focus is on connections between the source country, pre-adoption history, and strain in the mother-daughter relationship. While most relationships were rated by the mothers very positively, mothers with children adopted from Romania tended to report more strain in these relationships than mothers of children adopted from China. This difference is due, in part, to a between-country difference in age at adoption (children from Romania were older on average at the time of adoption than children adopted from China), and to the different effects of age of adoption within the two study groups (age at adoption was a strong predictor of relationship functioning within the Romanian sample but was unrelated to ratings of relationship functioning in the Chinese sample). In interpreting the results, we link age at adoption to duration of exposure to child welfare systems which were clearly better in China than in Romania during the period under study. The results extend those of previous research on international adoption by illustrating how pre-adoption exposure to different child welfare systems may affect parent-child relationships years later. 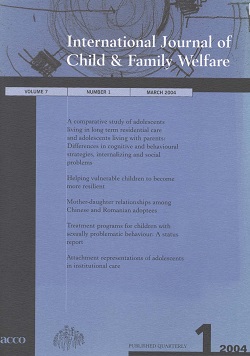